Why We Should Rethink Obesity

Much ink has been spilt describing the current obesity epidemic in the United States. But in this conversation, there has been a paucity of solutions and ideas that go beyond personal accountability, beyond the old aphorism that this is an issue that can be simply dieted and exercised away. In fact, many industries and diet fads have sprung up in response to this epidemic, all promising weight loss and multiple health benefits. Those industries are now worth in the excess of $66 billion, yet in the past two decades, we have seen a 30 percent increase in obesity.

Obesity is a multifactorial issue, and while personal responsibility is one component, public discourse continually excludes the influence of the built environment on this epidemic. The current epidemic is actually the result of individuals reacting appropriately to their environments. Factors such as limited access to affordable and healthy foods; poverty and food insecurity generating cycles of food deprivation and overeating; living in neighborhoods with fewer opportunities for physical activity; continued exposure to marketing of obesogenic products; and limited access to healthcare all work synergistically to increase one’s risk of becoming obese.

We need to rethink obesity because the costs associated with it do not solely accrue on the individual level; they aggregate in the societal level in a staggering fashion. According to a 2008 study, the indirect costs of obesity to society amount to $65.67 billion. Billions are lost as a result of lost productivity, absenteeism, premature mortality, and disability from comorbidities. According to the CDC, the annual medical cost of obesity was over $147 billion in 2008. In fact, obesity was responsible for more than 27 percent of the increase in health spending between 1987 and 2001. While the costs of obesity seem daunting, the government has tools in its arsenal (at local, state, and federal levels) to tackle this issue.

Supply-side controls such as taxes on sugar-sweetened beverages (SSBs) have been deployed in countries such as Mexico and cities such as Berkeley, CA, with much success. In both Mexico and Berkeley, the tax had the intended impact of reducing the consumption of SSBs as well as prompting the consumption of water, a non-caloric beverage. Many of the fears expressed by business owners and community leaders before passage of the tax, including declining sales and loss of jobs, were unfounded. In Berkeley, a 2017 study found that a tax on SSBs had no effect on overall sales as consumers substituted SSBs for healthier and untaxed alternatives. In Berkeley, a relatively small tax of one cent per ounce led to a 21 percent decline in SSB consumption and a 63 percent increase in water consumption.

Governments also can invest in healthy communities through the thoughtful construction of public spaces, for example, through the construction and maintenance of public water fountains. My master’s capstone research looks at the park environment and examines factors indigenous to a park setting that can work synergistically to promote or dissuade the consumption of water. These factors include the presence of drinking water sources, cleanliness of the drinking water source, water promotional materials, sources of SSBs in the park, and SSB advertisements nearby. 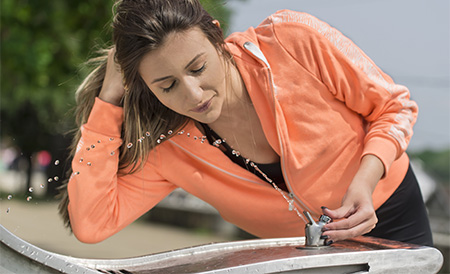 The local park is an inconspicuous but central public space. In one survey of U.S. adults, more than half of the participants reported going to parks and playgrounds at least once a month. This creates the possibility of engaging a large number of individuals and promoting the benefits of drinking readily available, safe, refreshing water. Interventions in spaces such as schools have shown that by improving access to potable water and promoting its consumption, one can increase consumption of water as well as improve body mass index and other health measures. Cities need to replicate these insights in other public spaces.

The ultimate goal of my research project is not just to understand the interplay of these factors on water consumption, but to understand how to augment public spaces to be more conducive to maintaining a healthy lifestyle. It should be noted that the cost of constructing and maintaining healthy communities is minuscule relative to the costs society incurs by doing nothing. It is time to do something.