A world free of tuberculosis (TB) is possible by 2045, if increased political will and financial resources are directed towards priority areas including providing evidence-based interventions to everyone, especially to high risk groups, and increasing research to develop new ways to diagnose, treat, and prevent TB. Funding this response will require substantial investments, and accountability mechanisms will be necessary to ensure that promises are kept and targets are reached. 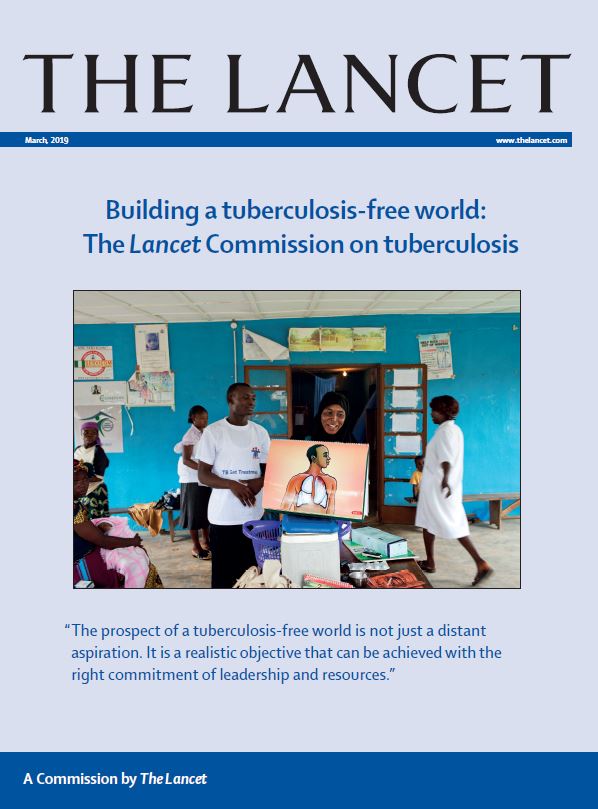 Published ahead of World TB Day (March 24, 2019), The Lancet Commission on TB estimates that there are significant financial benefits of reducing TB mortality – the savings from averting a TB death are estimated to be three times the costs, and may be much greater in many countries.

“This report is optimistic about ending TB – a disease that is preventable, treatable and curable. However, there is no room for complacency in our work, and we must act quickly and strategically to save the next generation from TB,” says lead Commissioner Eric Goosby, MD, UN Special Envoy on Tuberculosis and director of the Center for Global Health Delivery and Diplomacy at IGHS. “In the wake of the UN High-Level Meeting on TB, the Commission views this report as a roadmap to help keep high-burden countries accountable for defeating this deadly disease.”

TB remains the leading infectious killer of our time, responsible for 1.6 million deaths worldwide in 2017, with drug-resistant forms of TB threatening control efforts in many parts of the world. In addition, in 2017, around a quarter of the world’s population were living with TB infection.

The World Health Organization (WHO) first declared TB a public health crisis in 1993, and in 2018 the first-ever UN High-Level Meeting (UNHLM) on TB made ending the disease a global priority. This included ambitious goals to treat 40 million people, and to prevent 30 million new cases between 2018-2022.

The Lancet Commission on TB makes policy and investment recommendations to countries with high levels of TB and their development partners. The report is the work of 37 commissioners from 13 countries, including UCSF's Philip Hopewell, MD, Dean Jamison, PhD and Michael Reid, MD. The report includes economic analyses and modeling of interventions to counter treatment challenges (drug-resistant TB, HIV co-infection, and treatment within private health systems), which are published in detail in an accompanying research paper in The Lancet Global Health journal. The report is published with linked Comments from former UN Secretary-General, Ban Ki-moon, and Minister of Health and Family Welfare in India, Jagat Prakash Nadda, and a profile of Nandita Venkatesan, who is a journalist, TB survivor, patients’ rights activist and co-author on the report.

The first priority for most high burden countries is to ensure that high-quality diagnostic tests and treatments are available for all people with active TB.

Many people with TB, especially the poorest, cannot access or afford services, and health systems are often slow to identify and investigate cases, meaning patients do not complete treatment or recover. Currently more than a third of TB cases (35%) are not diagnosed or treated. The authors call for universal access to drug susceptibility testing at diagnosis to ensure that all patients are given appropriate treatment, including access to second-line treatment for drug-resistant TB. Estimates for this report suggest that increasing these interventions (drug susceptibility testing to 90% of people diagnosed, and second-line treatment to 85% of people with drug-resistant TB) in Moldova, where there are high levels of drug-resistant TB, could lead to a 73% reduction in TB deaths and a 43% reduction in new cases between 2018 and 2045.

However, private health care is often the main route to diagnosis and treatment for patients in high-burden countries, meaning countries and donors must engage with the sector to improve care. Modeling demonstrates that subsidizing tests and supporting patients to complete treatment in India, the country with the highest TB burden and predominantly private health care, more than one-quarter (28%) of TB deaths could be averted over the next 30 years (an additional 8 million lives). This would cost an extra $290 million each year, which is significantly less than India’s $32 billion losses associated with TB mortality each year.

Identifying groups at high risk of TB infection and bringing them into care will be vital, including offering TB prevention, such as treating latent TB, according to the report. This is particularly important in people with HIV, where risk of co-infection is high and TB is the leading cause of death. By making TB prevention available to 90% of people with HIV in Kenya, the authors estimate that TB mortality could be reduced by 17% (equivalent to 3 million lives saved) between 2020 and 2045, at a cost of $66 million a year between 2018 and 2045, which would be relatively modest compared with the economic costs ($2.7 billion each year) of the avoidable deaths from not implementing this measure.

However, even if current treatments were extended to 90% of people with TB, and 90% were successfully cured, existing efforts would have failed to avert 800,000 deaths in 2017. The authors assert that global research investment needs to increase by up to four times (from $726 million in 2016) to develop treatments and prevention tools that would transform TB outcomes.

Affected countries, donor nations, private sector and philanthropies must also devise effective financing strategies to end the TB epidemic. The initial global costs to reduce TB deaths by 90% (from 1.7 million per year to less than 200,000 a year) could be in the order of $10 billion a year, and investments would need to increase by about $5 billion a year initially. However, this would be followed by reduced costs (diminishing to $1-2 billion a year by the early 2040s) as the number of new cases reduces.

Investing in TB has a strong return on investment, with an estimated $16-82 return for every dollar spent on TB research and development. Similarly, TB control could produce considerable economic benefits for high burden countries, with savings three to seven times higher for every TB death averted, the authors estimate.

They argue that more public finances must be allocated to TB (from increasing GDP levels, taxing tobacco and alcohol, and by increasing health insurance) in addition to increased investment in local expertise and infrastructure. Estimates suggest that Bangladesh, Zambia, China and Indonesia could increase their annual TB expenditures by more than five-fold over the next five years.

Global donors also need to invest more wisely. Currently, only 24% of global health aid goes to global functions (compared with country-specific functions) that could help multiple countries, such as research and development, negotiating for lower prices for TB drugs, and leadership and advocacy. This funding should be extended to include a focus on reducing drug-resistant TB to avoid cross-border spread, and ensuring high risk groups are identified and cared for potentially through social insurance schemes.

“While there are many challenges to ending TB, we have the potential right now to address this problem," says report co-author Michael Reid, MD, of UCSF. "We have rapid, sensitive diagnostic tools, and the promise of potent TB treatment strategies in the pipeline. In addition, TB control strategies, new health technologies, sustained global economic growth, increased commitment to achieve universal health coverage, and growing political momentum could all make ending TB within a generation more feasible than ever before. With sound science, political will and shared responsibility, TB is a solvable problem.”

Accountability: A shared responsibility for TB

Increased accountability for TB at the local, national and global level is needed, according to the report. Heads of government must be held accountable for their TB outcomes and report these biannually at the United Nations; donors must be accountable for drug-resistant TB and for research and development. To meet this need, the authors launch The Lancet TB Observatory – an independent annual report evaluating progress towards the 2022 UNHLM targets, and monitoring domestic and global financing. The authors also created individual report cards monitoring progress on TB, political will and TB financing for the ten highest burden countries.

Writing in a linked Comment, Ban Ki-moon, former UN Secretary-General and Deputy Chair of The Elders, notes the importance of accountability and the role of TB control in the drive for universal health coverage (UHC). “UHC may seem a rather broad goal for holding countries to account in tackling tuberculosis, but with its emphasis on rights, equity and services allocated to needs, it is the ideal framework for tackling this persistently deadly disease," he says. "Tuberculosis kills more people than any other infectious disease; it disproportionately affects the poor and vulnerable; and drug-resistant strains threaten all of humanity. All of this means the case for prioritizing tuberculosis elimination within UHC reforms is unchallengeable.”

Highlighting policies implemented in India to achieve TB elimination by 2025, India’s Minister of Health and Family Welfare, Jagat Prakash Nadda, writes in a linked Comment: “The Lancet Commission reports the value of the loss associated with tuberculosis mortality to be an estimated $32 billion per year in India. New tools resulting from greater tuberculosis research and development (R&D) are essential to prevent those projected economic losses. With at least 30% of India’s population infected with tuberculosis, we need accurate point-of-care diagnostics for detecting tuberculosis infection and effective person-centered treatment. We need an effective vaccine to prevent tuberculosis. Delivering strong advocacy, in close coordination with the Ministry of Science and Technology and research-oriented pharmaceutical companies, and global commitment and collaboration to tuberculosis R&D are essential to reach our targets… To end tuberculosis, governments of high-burden countries will need to propose bold plans to address tuberculosis rather than be content with moderate incremental gains.”