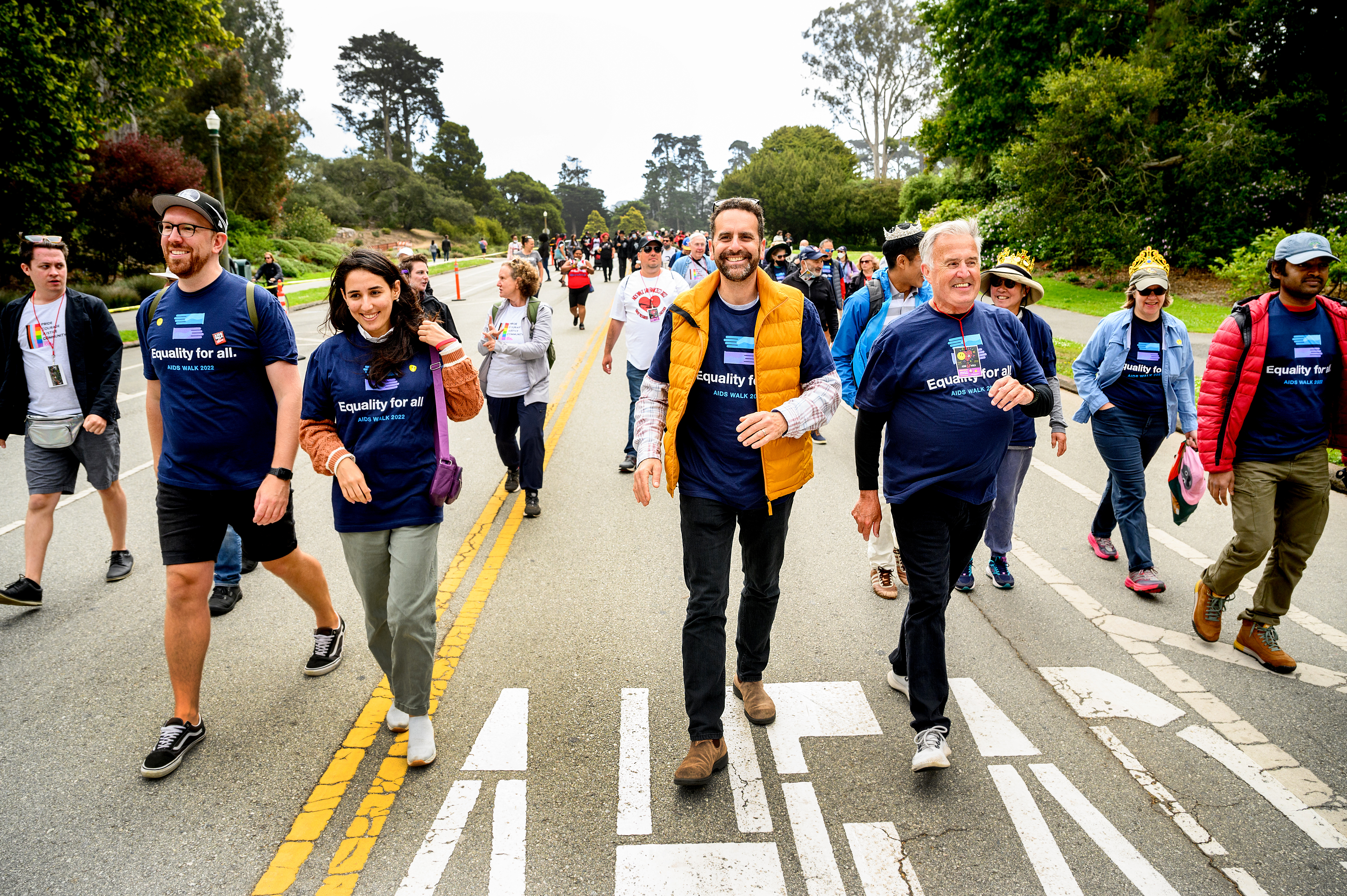 This Sunday, UCSF fielded 13 teams of fundraisers and walkers – more than 200 in all – for the AIDS Walk San Francisco. UCSF is the only organization to have participated every year since the event began in 1987, seeking to raise awareness of the desperate need for research into the fatal disease. This year’s event raised over $750,000, of which UCSF contributed $25,000.

UCSF’s relationship with the AIDS Walk is a reminder of just how central a role it has played in pioneering HIV care. Before 1983, when the first AIDS patients were admitted to San Francisco General Hospital, only out-patient care had been available. Many patients died at home, placing tremendous burden on their partners and families. The comprehensive model the hospital developed – combining primary and specialty care, social services and case management ­– would go on to be widely adopted around the world as “the San Francisco model.”

IGHS’s Paul Volberding, MD, began his career as at UCSF right around that time. He had planned to focus on cancer, but the overlap of Kaposi’s sarcoma and AIDS hijacked his plans. Volberding made a major contribution to the shape of the HIV pandemic in 1989 when he found that infected patients not yet showing symptoms of AIDS could delay their onset by taking the drug AZT, a reverse transcriptase inhibitor that had been approved to treat AIDS two years before.

This approach would eventually lead to the kind of care we have today – where medications can stave off all symptoms indefinitely. As medications have become more effective, UCSF has continued to pioneer how they could best be used. In 2013 San Francisco Department of Public Health was first in the nation to adopt a model, begun at Ward 86, in which patients who test HIV-positive are immediately given antiretroviral therapy (ART).

UCSF also participated in the research that found that ART medications can prevent HIV infection to those otherwise at high risk, including, first, children born to HIV-positive mothers and, later, adults at risk as a result of sexual practices or intravenous drug use. These findings have paved the way to today's standard of care, where infection itself can often be avoided through medication.

"The AIDS Walk has for many years highlighted the vital role of community response to the HIV epidemic. As the face of AIDS continues to evolve, the Walk remains as important as ever for our many Bay Area communities,” he said.

UCSF has memorialized the important contributions that happened in the hospital’s Ward 86 and in the AIDS Research Institute, which Volberding led until 2020. The institute integrates the AIDS research activities of more than 60 UCSF programs and laboratories and hundreds of scientists working to contain HIV/AIDS in at least 67 countries around the world. IGHS’s George Rutherford, MD, Jaime Sepulveda, MD, DSc, MPH, and Richard Feachem, DSc (Med), PhD, have made major contributions in those global efforts.

“The Walk been a source of pride and inspiration for all of us,” Rutherford said. “My first was in 1987 when I walked with a contingent from the San Francisco Department of Public Health.”

In 2014, UCSF raised $80,000 for the AIDS Walk, with a major contribution from IGHS’s Robert Mansfield. This year, IGHS, stewarded by Mansfield, brought in 40% of UCSF’s total contribution.

“The need for HIV/AIDS care is still real,” Mansfield explained. He loves bringing people together to celebrate UCSF’s successes against the disease and to pay homage to the AIDS Quilt.

“I'd only ever seen a small segment of the quilt hanging in the Mission Hall entrance,” said Graham Hinchcliffe, MS (’21). "It was both incredible and emotional to see more of the artistry and learn about the people who had passed away from AIDS in the 80s and 90s – and there are more patches still being added, which really highlights the importance of the research we are doing at IGHS and CAPS to improve the lives of people living with HIV in the Bay Area and beyond.”

As a result of the real contributions it’s made to HIV care, UCSF has also been a beneficiary of the funds raised by the AIDS Walk. Those funds launched Golden Compass Program in 2017, which aims to help older HIV-positive patients navigate health services.

They also provided the basis for the POP-UP clinic – short for Positive-health Onsite Program for Unstably Housed Populations – which opened in 2019. That clinic has already driven viral suppression rates among unhoused HIV-positive San Franciscans from 0% to 50%.

Mansfield is right: The need is still real.