UCSF and Partners in Mexico Study Treatment to Prevent Diabetes 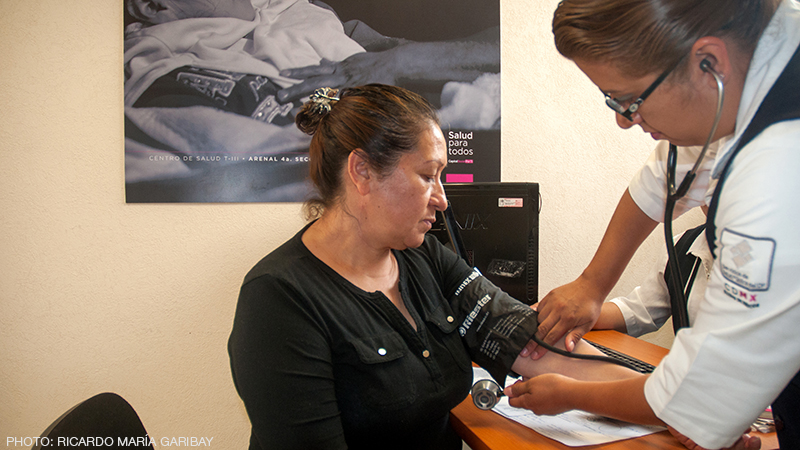 A medication shown to delay the onset of type 2 diabetes in people with prediabetes could make a big difference in Mexico, California, and globally through a partnership involving UCSF Institute for Global Health Sciences (IGHS) and the Center for Vulnerable Populations.

Drs. Jaime Sepulveda, IGHS executive director, and Dean Schillinger, UCSF School of Medicine diabetes expert and primary care physician, are leading the UCSF side of a partnership with Mexican health officials. The team is running a large-scale trial of metformin, a low-cost and safe diabetes medication derived from the French Lilac, in Mexico City’s health system that serves low-income patients.

“This is truly an unprecedented opportunity,” Schillinger said. “To be able to do this kind of practice-based research in the real world is exceedingly rare and will shed light onto a major global health problem.”

The partnership came about through Sepulveda’s work as co-chair of the UC-Mexico Initiative Health Working Group. The initiative was created by UC President Janet Napolitano in 2014 to encourage partnerships between the University of California and Mexico in areas of joint interest and benefit.

Diabetes has taken an increasingly large toll in Mexico in the past few decades, especially among populations of lower socioeconomic status. From 1994 to 2006, the prevalence of diabetes in Mexico doubled, according to a 2013 paper published in Globalization and Health. Diabetes is the leading cause of death and disability combined in Mexico, according to the Institute for Health Metrics and Evaluation. In 2015, 11.5 million Mexicans were thought to have diabetes, and 76,000 died, according to the International Diabetes Federation Atlas. Another 11.7 million had impaired glucose tolerance, another term for prediabetes, according to the atlas.

The Mexican government in 2016 declared diabetes a “public health emergency.” The declaration is part of “an organized social response to the epidemic,” which included Mexico’s “very original notion” of passing a tax on soda, the first in the world, Sepulveda said.

“But we needed to do something more, and that’s where UCSF, with our expertise in diabetes and primary care, came to collaborate,” he said.

The study, which began in June, is called the PRuDENTE Initiative (Prevencion de Diabetes por Nutricion, Tratamiento y Ejerciocio, or Prevention of Diabetes through Nutrition, Medication and Exercise). The PRuDENTE team has so far enrolled about 450 participants at 46 primary care health centers in Mexico City. The eventual goal is to include 3,000 people.

The participants, who are both obese and have prediabetes and less than age 65, are to be divided into two groups. One group will receive ongoing lifestyle counseling on diet and exercise, shown to reduce the risk for developing type 2 diabetes. The second will receive the same counseling plus 850 mg of metformin twice per day. Over three years, the researchers will use questionnaires, body measurements and blood and urine sampling to evaluate whether the addition of metformin prevents or delays the onset of diabetes.

Mexico City has a population of nearly 23 million people, and nearly 3 million of its lower income residents – those most vulnerable to getting diabetes -- receive their care through the public healthcare system in which this trial is embedded.

Metformin has been used to treat diabetes, particularly early stages of the disease, for decades. Previous studies done in tightly controlled circumstances with highly selected patients have shown metformin delays diabetes in patients with prediabetes and can prevent it altogether while the person takes the medication, Schillinger said. The drug reduces the incidence of diabetes overall by 30% or so, he said. For younger patients who are obese, however, Metformin can reduce new cases of diabetes by 50%. Metformin is also very inexpensive—pennies per pill—Schillinger said, making it a more financially feasible treatment than some diabetes drugs in development.

The study will answer crucial questions in the transition from controlled research to actual primary care practice, Schillinger said. “Will doctors prescribe it, will patients take it, will they stick with it?” he said. “Will it reduce diabetes in the real world, not just in the rarefied laboratory setting?”

The Mexico City Ministry of Health, which operates the clinics where the research is being conducted, has contributed about $4.5 million in resources for the study, Sepulveda said. Sepulveda and Schillinger are searching for additional funding to collect and store blood and urine samples, and to ensure fidelity to the study design. That includes, for example, making sure that people assigned to one group don’t cross over into another, that the clinics provide treatments correctly, and that laboratory assessments of outcomes are performed with the highest level of quality control, Schillinger said.

Schillinger and Sepulveda are also searching for funds for part of the project that could benefit California. Many of the people who use California’s safety net health care system are of Mexican descent -either immigrants or first generation --and are also socioeconomically similar to people in Mexico City’s public health care system, Schillinger said. In addition, Mexico’s public healthcare system is not unlike California’s safety net system. One additional  goal of the research is to model, using data collected from Mexico City, the health benefits and cost-effectiveness of using the same approach in California.

Sepulveda noted that California is surpassing Mexico in rates of diabetes and prediabetes, and that this is mostly occurring among Mexican migrants. Diabetes prevalence in the state is 14% overall, but for whites it is 11%. For Mexican migrants, it can be as high as 25%, he said. This high rate is due to migrants’ very low income, the high costs of fresh fruits and vegetables, their lack of access to health services and information, and how the soda industry targets its marketing to Latinos, he said.

The research could make a difference beyond just Mexico and California. While some researchers argue that people of Mexican descent are genetically susceptible to developing diabetes, Schillinger feels the root causes are social, not genetic. Type 2 diabetes was largely unknown in Mexico 100 years ago, he said, and a study he completed in Oaxaca, Mexico, found that indigenous Oaxacans – commonly thought of as genetically “high risk” - who led a more traditional lifestyle had very low rates of obesity and diabetes.

The rapidly changing food systems in Mexico and in California, particularly for lower-income people, the high cost of healthy food and more sedentary lifestyles are largely to blame, Schillinger said.

“Type 2 diabetes is part of the modern human condition. We all get it if we’re exposed to the wrong environments and social conditions,” he said.

About 425 million people globally were estimated to have diabetes in 2017, according to the International Diabetes Federation Atlas. By 2040, that number is expected to increase to 642 million. The direct annual cost of diabetes globally is $825 billion, according to a paper published in 2016 in the Lancet.

Confronting the diabetes epidemic will require multi-level approaches. This study “is not only important for Mexico and California, but is critical to advancing our knowledge regarding whether primary care has a role in helping tackle the diabetes epidemic. The results of this study have the potential to be a game-changer from a global health perspective,” Schillinger said.