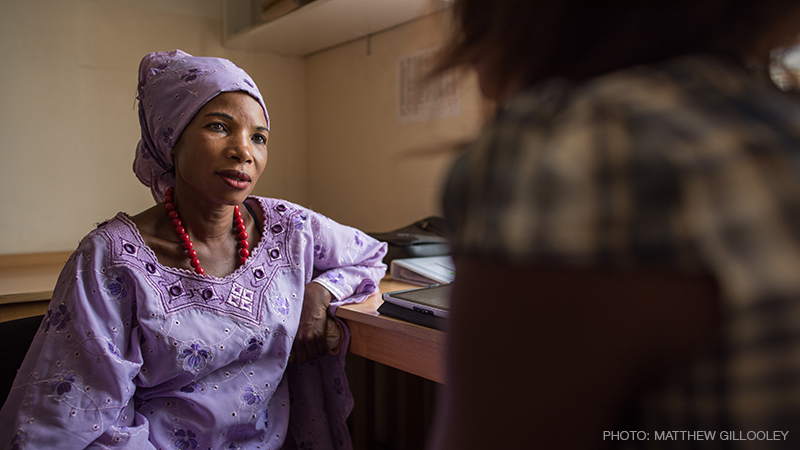 An Institute for Global Health Sciences (IGHS) group is partnering with Tanzanian health officials to end the country’s HIV epidemic by moving towards the United Nation’s 90-90-90 goals: that by 2020, 90% of people with HIV know they have the virus, 90% of these people are being treated, and of those treated, 90% are virally suppressed.

Global Strategic Information (GSI) at IGHS works with populations in Tanzania most likely to get or spread the virus. These include socially stigmatized groups—men who have sex with men, female sex workers, and people who inject drugs—people living and traveling along major transit corridors, and fisherfolk on the banks of Lake Victoria. About 6% of Tanzania’s population is HIV-positive, but the prevalence is higher among these populations.

With funding from the U.S. Centers for Disease Control through the President’s Emergency Plan for AIDS Relief (PEPFAR), the GSI group teams with Tanzania’s Ministry of Health, Community Development, Gender, Elderly and Children to better understand what’s driving the epidemic in the country and how to stop it.

“It’s an exciting time,” said Susie Welty, senior program manager for GSI’s Tanzania projects. “There’s a lot of momentum in really working towards these 90-90-90 goals and ending the epidemic, and working with these populations to reach that.”

The team conducts detailed HIV surveillance studies that help to identify: HIV prevalence among the different high-risk groups, behaviors that contribute to transmitting the virus, knowledge about HIV transmission, and which services they are accessing (for example, whether they are on treatment if they are HIV infected). The data from the studies help the Ministry of Health and others understand the scope of the HIV epidemic, characterized progress towards 90/90/90 goals, plan interventions, allocate resources and set policy.

GSI has been active in Tanzania since 2002, with the first surveillance study completed in 2009. Studies of the stigmatized groups have continued every three to five years. Studies began this year with the fisherfolk and along transit corridors.

Same-sex sexual activity, sex work, and drug use are illegal in Tanzania, and Tanzanian society discriminates against people in these groups. Because of this, the team uses a chain referral method to find study participants in which each study participant is asked to find three people like him or her to participate. Those people are then asked to find three more people each until enough people are found for a statistically valid sample.

“By doing this sort of peer referral but limiting it, we aim to get a sample that’s representative of the whole risk group,” Welty said.

Participants are interviewed in a non-threatening and safe place. Questions include those on basic demographic information, such as education and income, and those that target specific groups and behaviors. Participants are offered HIV testing, as well as testing for hepatitis B, hepatitis C and syphilis. Those who test positive are provided a referral to treatment.

Before the first surveillance study was completed, little specific information was known about HIV among these stigmatized groups in Tanzania. The team has since learned a great deal. For example, its 2010 study provided the first epidemiological information on HIV and female sex workers in Dar es Salaam, the largest city in Tanzania. Results were published in a 2011 ministry report.

The team found that 31% of female sex workers in Dar es Salaam were HIV positive. About 83% said they’d used a condom the last time they had sex, but the most common reason sex workers hadn’t was a partner not wanting to or offering to pay more.

Lower-income sex workers were much more likely not to use a condom “because someone will pay them a little bit extra not to, and that little bit extra makes a difference for them,” Welty said.

The team’s 2007 and 2012 work on people who inject drugs in Zanzibar, a semi-autonomous island region off mainland Tanzania, was published in a 2015 paper in AIDS and Behavior. The team found an HIV prevalence of about 11% among the people studied. About 29% reported having shared a needle in the past month, and 38% said they’d been tested for HIV infection and received results in the past year. The team also found that people who had injected drugs for five years or more were more likely to be infected.

For example, one common finding in the team’s work is that people from stigmatized groups don’t seek treatment. Health care providers often disapprove of people from these groups and have been known to treat them poorly or even refuse to serve them, Said said.

A group of providers has now been trained to treat these people “with the same respect and confidentiality that they would treat any other client,” Said said. The providers have also learned about these groups’ risk behaviors, which can be different than those of the general population, and “the importance of talking with these individuals about their behaviors in a non-judgmental and friendly way,” to help them, no matter the providers’ “personal views of these individual’s lifestyles,” she said. People from stigmatized groups are then referred to these trained providers.

The team’s findings have also helped in developing peer educator programs, which are supported by the ministry and PEPFAR, Welty said. The peer educators are part of the community, and they “routinely interact with members of these groups to provide access to condoms, lube, education and referrals for treatment,” Welty said.

In addition to the surveillance studies, the team’s early work helped identify transit corridors as hot spots for HIV transmission. Using existing data, in 2008 the team mapped where high numbers of people were getting HIV treatment.

“It was clear that the map lit up wherever roads intersected,” Welty said. “One town on the border with Zambia was particularly affected. The team learned this was likely due to truckers having to wait several days at the border to get papers to cross. During that time, the truckers and people in the community were having high-risk sex”, Welty said.

“That the transit corridor work is funded and moving forward is a success story of the partnership with the ministry,” Welty added.

The team is taking two new steps in its current work. The first is to test how genetically similar strains of HIV found among members of high-risk populations are to each other. This helps researchers tell where people are getting the virus, Welty said. The team also plans to use recency testing, which shows whether someone was infected in the last six months.

“We can tell whether these people are being recently infected, and work backward that way to help them identify their partners who might’ve infected them and get those people on treatment,” Welty said.