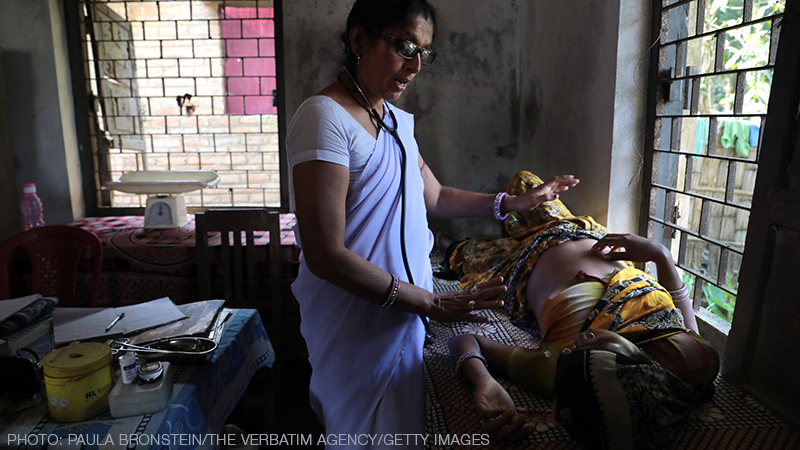 Women in Kenya, India, and even California could get more respectful reproductive health care and be more likely to visit providers when they need care through a current Institute for Global Health Sciences project.

The Strengthening People-centered Accessibility, Respect, and Quality (SPARQ) project worked with women and health facilities in Kenya and India on person-centered care in maternity, family planning and abortion services. Person-centered care for such services is “essentially a measure of care that puts the woman at the center of care, that is attentive to the woman’s priorities and needs,” said Dominic Montagu, principal investigator and professor at the UCSF Institute for Global Health Sciences, for the project along with May Sudhinaraset, assistant professor at UCLA.

Making care person-centered could provide a path to improve women’s and children’s health, Montagu said. Although women have had better access globally to reproductive care in the past 15 years, they continue to experience poor outcomes, including high maternal mortality rates and limited use of family planning methods. When women have bad experiences with providers, they avoid care, forgoing family planning, delaying abortions and delaying going to the hospital during labor, Montagu said.

With this goal, SPARQ partnered with public health organizations and health facilities in India and Kenya, including Public Health Foundation of India, Marie Stopes International, Population Services International, Innovations for Poverty Action and Jacaranda Health. The four-and-a-half-year project finishes at the end of 2019. The project was created to measure the care women received, design interventions to solve problems women identified, and learn whether those interventions could be applied and work on a broad scale.

SPARQ began with the researchers determining components of person-centered care, such as dignity and respect, autonomy, privacy and confidentiality, and stigma and discrimination. They interviewed women who’d received services to learn what the women felt was important about these domains. They then designed scales for each health service (maternity care, family planning care and abortion care) with survey questions to measure the degree of person-centered care women received.

For example, whether providers introduced themselves and called women by their preferred name was a marker of whether women were treated with dignity and given personal care

The women’s concerns could be different than “Eurocentric experiences and norms,” Montagu said. For example, in India women often didn’t want private rooms because they worried they’d be lonely or become targets for abuse or extortion, Montagu said. But women valued other aspects of privacy. For example, they wanted to be covered with a blanket while being examined.

In Kenya, abortion is very stigmatized and was banned for part of the time the researchers worked there, Sudhinaraset said. For Kenyan women who’d had abortions, confidentiality was a major privacy concern. “Did they feel people who weren’t involved in their care could hear what was being discussed or did they feel their information would be kept confidential? That’s obviously really, really important in Kenya,” she said.

In India, women in labor arrived in the hospitals SPARQ worked with on average 90 minutes before giving birth: not enough time to identify and deal with complications or provide emergency services, Montagu said. Women deliver in hospitals to get the roughly $30 the government pays them if they do. But women go as late as they can and leave as early as they can because “everyone knows you’ll be badly treated at the hospital,” he said. “You’ll be yelled at, you’ll be insulted, you’ll be abandoned and ignored, dismissed and treated with disrespect.”

In Kenya, mothers who experienced better person-centered care during delivery were less likely to report newborn complications and more likely to say they’d go back to the facility where they gave birth if they had another health problem, Sudhinaraset said. What might be responsible for that-- be it women feeling more empowered with health information or trusting providers more and better following provider guidelines-- is the subject of a study about to be launched in Kenya.

After evaluating how women were treated, the researchers and staff at partner organizations designed interventions to improve women’s experiences. For example, Sudhinaraset said that in Kenya, because of the stigma associated with abortion, many women felt socially isolated after having one.

The contact “decreased women’s perceived stigma,” Sudhinaraset said. “There were a lot of text messages that went back-and-forth, an indicator that women actually wanted this.”

“Women who don’t otherwise have social support because of the stigma of abortion were able to get support through this project,” she added.

After developing interventions in a few locations, the researchers tried to apply them broadly in more facilities. How successful the project was at doing so is one of a number of questions the researchers are now working to answer. With just a few months left, they are analyzing data and communicating with partners and government officials to assure that the importance of person-centered care measurement and focus be integrated into new quality initiatives. Specific follow-on projects have been discussed but not yet planned.

Even without such projects, SPARQ’s efforts have had impact. Sudhinaraset noted the scales they created have been used in a number of other countries, including Turkey, Sri Lanka, Ethiopia, and the Democratic Republic of the Congo.

“Our scales are definitely being used and adapted in other contexts,” she said.

Those contexts could soon include California. Patience Afulani, assistant professor of Epidemiology and Biostatistics at UCSF, helped develop and validate the maternity care scale when she was a postdoctoral fellow with SPARQ. Along with another researcher, she received funding to adapt the scale to use with women of color in California and is now conducting interviews to learn “what changes need to be made to make the scale appropriate and relevant to the experiences” of these women, she said.

Afulani’s work is important, Sudhinaraset said, because how providers treat women is “a challenge that we have in our own backyard,” particularly with immigrant women and communities of color.

“I really think this is a global and a local issue.”