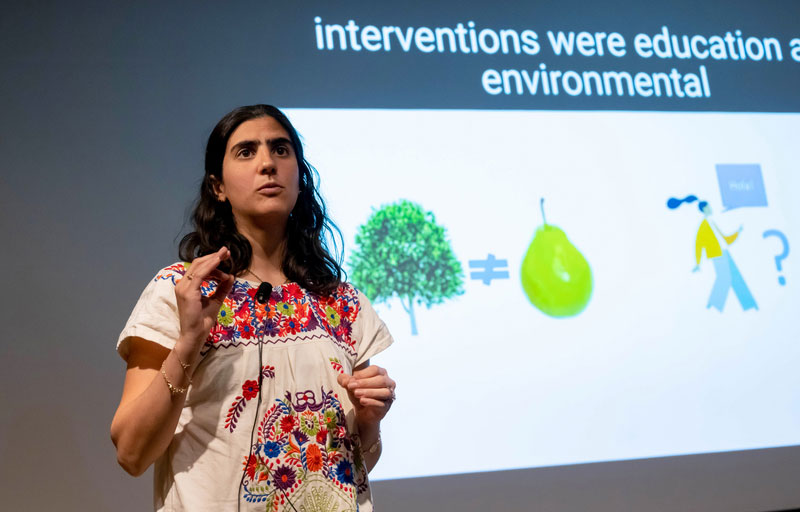 The most successful scientists can describe their research succinctly and without jargon, allowing them to convey to patients, research participants, journalists, philanthropists and policy makers why their work matters. The UCSF Grad Slam offers UCSF students the chance to begin learning how to explain their work this way.

Global health sciences PhD student Lucia Abascal, MD, was encouraged to participate by her dissertation advisor, Margaret Handley, PhD, a professor of epidemiology and co-director of the PRISE Center. Much of Handley’s work has focused on making research studies more responsive to participants’ needs, so she understands the importance plain English can play in improving health.

Abascal was intrigued. Her dissertation research focused on the barriers Spanish speakers faced in complying with isolation and quarantine during the first months of the COVID-19 pandemic. The data came from work Abascal did as a clinician working with the UCSF Pandemic Initiative for Equity and Action (UPIEA) as it performed contact tracing with the San Francisco Public Health Department (SFDPH). The findings point to what happens when the average person doesn’t understand what they’re being asked, or why, and when their needs aren’t addressed, leaving them unable to comply. Many of those asked to isolate lived with multiple housemates and/or family members and didn’t have access to paid time off at work.

Because Spanish is a key part of her research and her own native language, Abascal asked the Slam organizers if she could participate in Spanish. When the answer came that she could, she had, as she put it, no choice but to participate. After resolving some initial challenges with the organizers about how to provide simultaneous translation, Abascal became the first person ever to present in a language other than English and placed third in the UCSF competition.

Her talk was called “No le pidas peral al olmo,” which means, loosely, “You can’t get blood from a stone.”

“My research by nature is easy to understand,” Abascal said. “It deals with everyday issues. A big difference between me and the others is the others were dealing with crazy biochemical molecules, translation that is definitely harder.”

By participating, Abascal also flagged that California’s public university system still lacks smooth policies for enabling communication in languages other than English, even though about 40 percent of the state’s residents speak something other than English at home.

As a result of the work her work with SFDPH, former head Tomás Aragón, who was promoted to lead the California Department of Public Health, invited Abascal to work for the state as a COVID expert who could be interviewed for Spanish-language media.

We asked her what fuels her passion for communicating science to the public.

“That was one of the biggest things that were lacking in the pandemic,” she said. “There’s a lot of research on people really understanding the science and then following the public health recommendations. If you don’t explain the science, you leave a void for people, and that’s where misinformation comes in.”