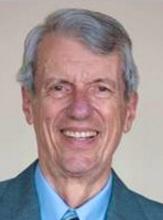 UCSF Global Health Sciences, the Department of Epidemiology and Biostatistics and others at UCSF are saddened at the news that longtime global health leader Thomas L. Hall, MD, PhD, died May 20 after a long battle with leukemia. He was 85.

“Tom was the pioneer and true spirit of global health in the Bay Area and beyond,” said Haile T. Debas, MD, chancellor emeritus and founder of UCSF Global Health Sciences.

“He was a friend I admired highly and whose advice I sought frequently, especially during the establishment of UCSF Global Health Sciences, Debas said. “We have lost a giant in global health, a leader of great wisdom, compassion, and elegance.”

Hall came to UCSF in 1987 as a professor of Epidemiology and Biostatistics, directing a postdoctoral training program in HIV/AIDS prevention studies, teaching global health courses, and consulting internationally.

“ Tom Hall was a dedicated physician and epidemiologist whose contributions to global health research and innovative programs in low-resource countries were truly pioneering,” Said Robert A. Hiatt, chair of the Department of Epidemiology and Biostatistics. “He was a valued member of our department from 1987 until his retirement in 1996. Always generous and thoughtful, his calm presence was appreciated by faculty colleagues and students alike. His legacy is not only the scientific contributions he made, but the model of collegiality and friendship he left us.”

At UCSF, Hall started the first global health course, Global Health 101, and taught in both the School of Medicine and the School of Nursing.  “He was a committed mentor and often hosted students, residents and faculty at his home,” said Madhavi Dandu, MD, MPH, director of the GHS masters program. She first met Hall when she was a resident at UCSF and later co-taught several courses with him. “He was the person everyone went to if they were interested in global health. He shepherded so many of us into our current roles and was an inspiration in the way he lived his life,” she said.

Hall began his global health career in family planning and population studies and was one of the first researchers to focus on workforce planning and the need for low-income countries to increase the number of health care providers.

“He not only provided two generations of medical students with on-the-ground experiences in global health but also was an expert on international health systems and the work force, authoring numerous papers and lighting the way for what is now a major field in global health,” said George Rutherford, MD, professor of Epidemiology and Biostatistics and director of Global Strategic Information at GHS. “He was a generous and enthusiastic mentor, colleague and friend and will be missed.”

Hall’s early leadership in the global health field went beyond his roles at UCSF. In the 1980s, Hall established an interest group in public health and global health, a precursor of the current Bay Area Global Health Consortium.

He also established, financed, and nurtured the Global Health Education Consortium (GHEC), which was in many ways the foundation on which both the UCSF Global Health Sciences Masters program and the educational programs of the Consortium of Universities for Global Health (CUGH) were based, according to Debas, who co-founded CUGH.

“CUGH, and all of us, owe Tom a debt of gratitude because without GHEC, CUGH would not have achieved the size and success it has today,” he said.

Hall’s family is planning a memorial service for later in the year.