The University of California San Francisco’s work to advance health worldwide relies on collaborations with scientists around the world. The Institute for Global health Sciences is officially recognizing a few of the most central collaborators with whom our faculty work. These are a few of their stories. 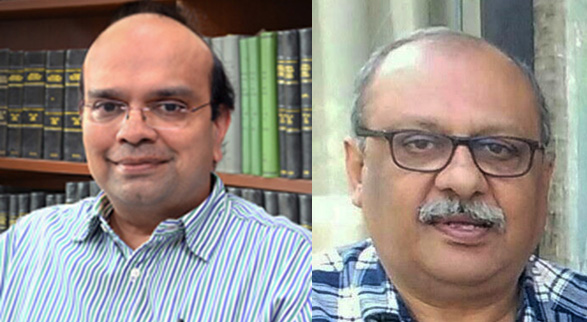 Maria Ekstrand, PhD, a professor of medicine at UCSF, and Tony Raj, MD, a professor of physiology and the founding chief of the division of medical informatics St. John’s Research Institute at the St John’s National Academy of Health Sciences in Bangalore, India, began collaborating in 2004, when the two institutions first launched a research collaboration.

Ekstrand’s work with Raj has focused on using emerging m-health technology to improve healthcare workers’ performance on issues as diverse as hand-washing and stigmatization of people living with HIV.

Ekstrand was spending quite a bit of time at St. John’s, where she had taken on a role as adjunct professor. In 2010, she met Krishnamachari Srinivasan, MD, for a cup of coffee in the cafeteria. Their conversation naturally veered toward their shared interest in how the stigma attached to HIV affects the care affected patients receive.

“The idea resonated with me, as stigma was very much front and center in my clinical work as a psychiatrist,” said Srinivasan.

The three became co-investigators on a study that received NIH funding to test a tablet-based intervention to reduce HIV stigma among healthcare workers in 50 Indian facilities. The initial results were published in late 2019 and the final outcome paper is currently in press in the Journal of Acquired Immunodeficiency Syndrome. They’ve since been awarded additional NIH funding to study interventions for rural residents diagnosed with both depression/anxiety and diabetes or cardiovascular disease.

The three also share commitment to mentoring the next generation of global health researchers, which has resulted in them co-mentoring both U.S. and Indian trainees through MHIRT and GloCal fellowships.

“I particularly admire Maria’s boundless energy and her unflagging sense of purpose and optimism. It’s infectious – no need for mask! Over the years and, over several cups of coffee, our easy sense of camaraderie has grown in strength,” Srinivasan said.

“This collaboration has resulted in what I’m sure will be lifelong friendships,” Ekstrand seconded.