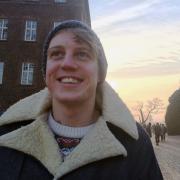 1. What was your research focus while you were a master's student in the GHS program? Do you have any updates on that project?
I worked with Sheri Weiser and her team on the relationship between food insecurity and health. My project involved qualitative interviews with low-income people living with HIV/AIDS in the Bay Area, trying to get some insight into the lived experience of food insecurity in that population and its relationship to HIV-related health and care. We've since published two research papers off the back of the Capstone and are working on the later drafts of a third manuscript. The team has also continued their work with food insecurity among HIV and diabetes patients, with more set to come.

2. What were some of the challenges you encountered in your fieldwork?
I think it's important to say that any challenges we encountered aren't really worthy of the name given the challenges our participants described to us. After all, I was the one who had food on the table when I got home from interviews. But that said, any fieldwork in global health—and particularly one in such a short window of time—is going to be logistically complex, labor intensive, and emotionally draining; if it isn't, you probably haven't engaged enough! Ours was definitely no exception to that. But I was with a brilliant team, and we were extremely lucky to partner with an amazing non-profit organization, Project Open Hand. Both of those things helped the project to run as smooth as could be hoped for.

3. What have you been up to since you finished the master's program in 2014?
Medical school, medical school, medical school. I was halfway through when I came to the program so now I'm finishing my clinical training at University College London (UCL). It's a really different experience, a time-demanding one that leaves little room for intellectual freedom or creativity, and I miss that sometimes, as well as the passion in global health. But I try to do what little I can on the side: I work for Doctors of the World most weeks, who run a clinic in East London improving access to healthcare among undocumented migrants—work that's particularly salient amid the current European refugee crisis.

4. How did the completion of the program impact your career plans?
To be honest it completely derailed them (in a good way!). What my time at UCSF did, quite unexpectedly, was to politicize my engagement with health. Before I walked into the Tenderloin, my career plans were based on what I suppose is a kind of ethical humanitarianism—ambitions to work for MSF, Partners in Health, etc. But then I was confronted with a scale and visibility of suffering I'd never previously encountered, just a few blocks from where we were studying, in supposedly the most advanced nation on Earth. The existence of that suffering under those conditions, it seemed to me, had to be determined primarily by political economy. The impact on my plans has ultimately reflected that, shifting them towards research and activism in the social sciences of health, especially with regard to the West. So I harbour not-so-secret pipedreams of a PhD, but that's years away at the moment…

5. What advice would you give prospective students or other doctors/nurses/pharmacists considering a career in global health?
I would say it's important to always remember the "global" part of global health—by which I mean the opposite of what you might expect. The nature of the field actually means that the easiest issues to leave off the agenda are often not the most remote ones, but the ones on your doorstep: the homelessness you pass on your way to work, the citizenship disparities where you buy your groceries, the misalignment between addiction science and policy that stigmatizes the neighborhood next to yours. So with that in mind, go for it, but don't forget to cast your gaze locally as well as afar. And do everything with a healthy dose of the two S's: skepticism and solidarity.

Harry's capstone research earned him the 2014 John L. Ziegler Annual Outstanding Capstone Award. His two published manuscripts are Experiences with food insecurity and risky sex among low-income people living with HIV/AIDS in a resource-rich setting in the Journal of the International AIDS Society and Food insecurity, chronic illness, and gentrification in the San Francisco Bay Area: An example of structural violence in United States public policy in Social Science & Medicine.