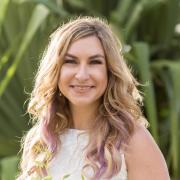 Ashley Lucas had worked as a nurse for 10 years before moving from Toronto to enter the GHS master’s program in 2014 and change the course of her career. Although she had done some clinical work and medical repatriation in Africa, Indonesia, and the Middle East, she wanted to go deeper into the world of global health.

Returning to school after a long break was a challenge, but Ashley quickly fell in love with San Francisco and formed a strong relationship with her capstone project mentor, Karen Saylors, PhD. Her project was a systematic review for Dr. Saylors’ HIV/AIDS prevention study sponsored by the US Department of Defense. Ashley’s research on sexual networking literature provided a baseline for the study, which worked with three key populations—military, sex workers, and civilians—in three sites: Senegal, Zambia, and Kenya.

Ashley liked that she could work with the team at the project’s launch, that she could use her French language skills for the study in Senegal, and that Dr. Saylors was such a flexible and supportive mentor; she says her capstone project experience “was nothing but positive.” She did all of her research in San Francisco, but was later invited by Dr. Saylors to visit Senegal for a week to participate in a partner meeting with the Senegalese military and begin implementation of the study with the in-country team.

The connection with her mentor paid off: not long after graduating from the master’s program in 2015, Ashley started working with Dr. Saylors as her manager at Metabiota, a San Francisco-based company that investigates endemic and epidemic outbreaks to help manage and reduce the spread of infectious diseases (metabiota.com). As a member of Metabiota’s Behavioral Risk Analytics team, she has continued to work on the HIV/AIDS prevention study and returned to Senegal for training and implementation with the main military study team. Her other projects include a USAID study of zoonotic transmission of viruses and a new PEPFAR care and treatment program in Cameroon.

As the only clinician on her team at Metabiota, Ashley says it’s nice to be able to weigh in on the clinical aspects of projects, but she now enjoys working in a research capacity. Her experience in the GHS master’s program provided a direct path to her current job, although she says landing in a research position was unexpected: “I got the job of my dreams without knowing that this is what I wanted.” She looks forward to expanding her research skills and continuing to grow and learn at Metabiota. With a new master’s degree, a new job, and her recent marriage, Ashley’s future looks bright.