Tackling a Deadly Infectious Disease: A Drama in Four Acts 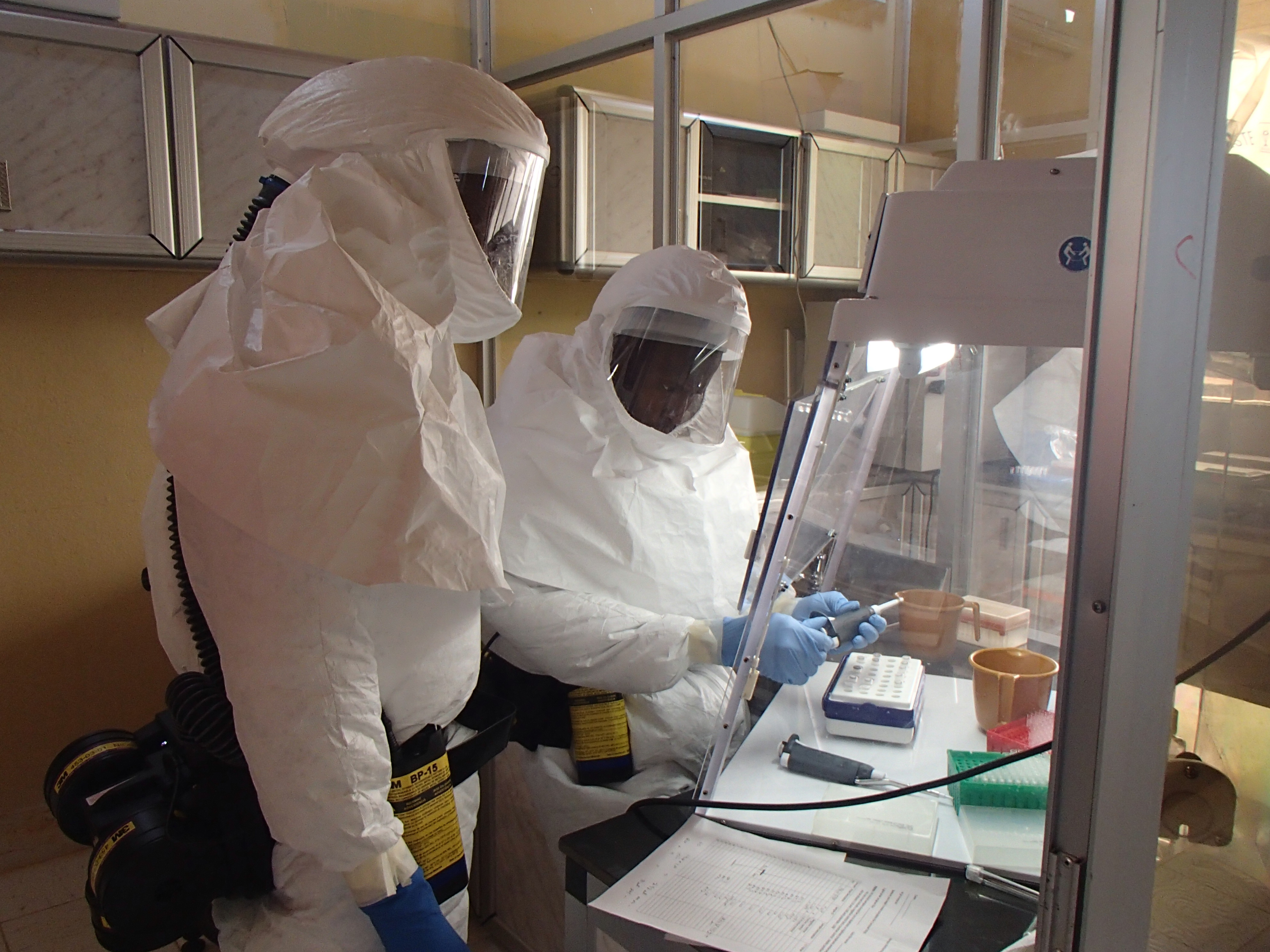 Much of global health work focuses on making sure that the medical advances made in high-resource countries get to the patients who need them all around the world, including in poor, underdeveloped or remote areas. As a medical student, Dan Kelly, MD, MPH – recently appointed to UCSF Institute for Global Health Sciences (IGHS) and the Department of Epidemiology Biostatistics (DEB) faculty – traveled to Sierra Leone as it was emerging from a civil war to prepare for a career doing that kind of work.

His career since then has kept him focused in Africa and also – to his surprise – put him in a position where he can contribute to major medical advances against the lethal Ebola virus, which is endemic to Africa. Kelly’s winding and dramatic path highlights how quickly global health work can alter the face of a deadly new disease when things go right.

On his first trip to Sierra Leone in 2006, Kelly was shocked to find that people in the rural Kono district were dying of conditions that could be resolved through a primary care visit. Kelly had connected through his medical school housemate with a local doctor Mohamed Bailor Barrie, who has since become an IGHS PhD student. The two decided to open a clinic in Kono to deliver quality primary care. The district’s many amputees – victims of land mines during the civil war – made up the bulk of the early patients at the clinic, which eventually took the name Wellbody.

Kelly and Barrie teamed up with others, including Drs. Paul Farmer and Joia Mukherjee of Harvard, to build HIV and tuberculosis community health-worker programs across Kono. Eventually, Wellbody partnered with the Harvard-affiliated global health nonprofit Partners in Health. (The two would later merge.)

II. The Eye of the Storm

Kelly continued to travel regularly to Sierra Leone to work in the clinic and to develop the health-worker programs as he moved through advanced training as an infectious disease specialist, and then on to an MPH. And then, in 2014, Ebola blew up in Sierra Leone and much of West Africa.

When one of Kelly’s close friends there, also a doctor, died caring for Ebola patients, Kelly decided to go back to Sierra Leone to train doctors on how to care for patients without getting infected.

He quickly became a go-to source for U.S. reporters covering the outbreak. His prominence was a measure of just how tenuous American medicine’s connections to West Africa were and how scary the situation was, even for seasoned reporters.

“I had never treated an Ebola patient before. I basically got on the plane with a Médecins sans Frontières manual and some CDC materials and sort of read them on the way,” Kelly recalled. He had yet to complete his fellowship, but he knew that local Sierra Leones didn’t have experience, either. “Ebola wasn’t something they knew how to triage and recognize,” he said.

Kelly flew into danger in Sierra Leone on the last flight before the country closed its borders to stop the spread of the deadly virus. Barrie, by then doing an MS in global health at Harvard, also headed back.

Before long, Kelly was caring for Ebola patients himself. Kelly and Barrie worked with Partners in Health to open an Ebola treatment unit. Keeping the virus contained was no small feat, but at that point the only real treatment for Ebola was to keep patients hydrated. Kelly recalls entering the isolation unit each morning to find about a dozen of his patients had died overnight.

“I felt really handicapped taking care of Ebola patients,” he said. “There wasn’t much that I could do.”

Kelly made the turn that many clinicians do when they’re facing a ruthlessly deadly disease: He started doing research to try to find more, better, faster ways to help patients fight death.

Kelly’s research charts the rapid progress made on Ebola. He first worked to validate rapid diagnostic tests that would allow infected patients to be treated quickly and, equally importantly, ensure that only infected patients would be quarantined. (Fear of quarantine kept some patients from seeking treatment until they were direly ill.)

Kelly and others, including IGHS/DEB colleague George Rutherford, screened survivors in what had been hotspots for Ebola antibodies. They found in 2016 that some people who had not seemed sick had actually been infected with Ebola. The disease wasn’t quite as deadly as it seemed. A follow-up paper concluded that the minimally symptomatic cases of Ebola occurred in a “non-random” pattern: People who didn’t live with sufferers were more likely to escape serious illness. Kelly is continuing to research the extent to which exposure risk serves as an epidemiological reason for asymptomatic or mildly symptomatic infection.

Kelly and his co-authors had started to imagine a time when Ebola’s grip had been loosened: Their findings, they noted, “ha[d] implications for the definition of Ebola virus disease survivorship, delineation of transmission chains, and future vaccine studies.”

Ideas for a vaccine had circulated since the 1990s. But as the West African epidemic rolled into its second year with vaccines being tried for efficacy, medical research came under attack. Why were the ravages of Ebola not being met with funding, focused research and plain old shoe leather? Some combination of two things finally pushed the field into action. Optimists point to the World Health Organization redoubling its focus in 2015 on addressing deadly diseases in low-resource settings. Critics attribute the uptick in research to a handful of sick white doctors who brought Ebola to the United States and Europe. It’s an old story in global health that lives lost in Africa just don’t trigger the same urgency as lives lost elsewhere.

Whatever the motivation, monoclonal antibodies and other treatments began to enter the fight against Ebola. At the beginning of the West African outbreak, those diagnosed had a 10 percent chance of surviving; by the end, aggressive supportive care had increased the chance of survival to 50 percent. A vaccine had finally reached Phase 3 trials.

Then, in 2016, the West African epidemic went quiet, leaving in its wake questions about whether research that had finally kicked into high gear would again be shelved.

An answer came in 2019 as Ebola began to crop up in the Congo.

“There were huge steps made during the West African outbreak,” Kelly said. “During these Congolese outbreaks we’re really seeing the fruits of that labor.” A vaccine offered by Merck has been given to about 250,000 people, proving about 88 percent effective. By 2019, patients had just a 10 percent chance of dying if they sought treatment within 48 hours.

Kelly did some of the epidemiological modeling to help measure how effective those vaccines have been.

“This is a really success story to show how in one decade how far we can take medicine and how much progress we can make. There is a huge opportunity to learn lessons for other emerging infections,” Kelly said.

In some ways, Ebola was an easier target than other major infectious diseases that have emerged from Africa.

“The virus because of its genetics and type it is not as complicated as like a malaria or HIV or TB,” Kelly said. “I’m not saying it’s easy, but it’s more of a straight shot in terms of our ability to advance science to treat and prevent it. If HIV were as straightforward, we would have cured it already.”

But the game isn’t over yet. Ebola has left a raft of survivors in its wake as it has surged and retreated across Africa since 1976. This is one of many unanswered research questions surrounding Ebola.

Survivors experience serious lingering side effects, including joint pain and an eye infection called uveitis in addition to the mental health challenges triggered by the near-death experience. Uveitis was what caused one blue eye of Ian Crozier – an American doctor treated for Ebola at Emory University after being infected in Sierra Leone – to turn green months after he’d recovered.

Many also have post-traumatic stress disorder, as underscored by a recent Washington Post profile of another American health worker who survived Ebola.

Kelly is now participating in an NIH study on lasting after-effects (or sequelae) among Ebola survivors in Liberia focused on how much follow-up care they may need after being treated. Kelly is also studying how some people escape serious illness when they’re infected with Ebola and whether they develop any serious long-term consequences.

In all of this work, he follows in the footsteps of UCSF’s early HIV researchers. First help patients, then understand the disease. Devise treatment and prevention so infection becomes a chronic problem instead of a death sentence. Then work to ameliorate and prevent the chronic symptoms. The University’s early activism on HIV, at home and abroad, continues to serve as a model for addressing deadly emerging infectious diseases.