Immigration Reform: A Perceived Barrier to HIV Treatment and Care in San Francisco 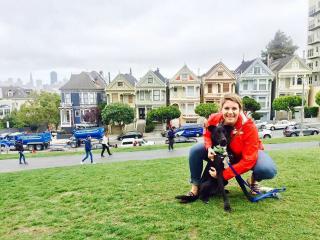 As master’s students in the UCSF Institute for Global Health Sciences program, our coursework deals with real-world, global health concerns that are constantly evolving. To address some of these issues, we develop individual research projects that will take the shape of our nine-week capstone fieldwork project in late spring. My research will be based in San Francisco and will look at barriers to health for undocumented persons.

The 2017 Public Policy Institute of California claims that the state is home to more than ten million immigrants, and they account for more than 30% of San Francisco’s population. Despite political efforts (i.e., augmented enforcement efforts) to decrease migration over the Mexico-US border, 78% of undocumented immigrants are from Latin America. On January 25, 2017, President Trump signed Executive Order 13,768, Enhancing Public Safety in the Interior of the United States, which imposes more refined policies and procedures for immigrant removal from the US.

The “U.S. Immigration and Customs Enforcement (ICE) 2017 Removal and Operations Report” shows that approximately 7,231 criminal and non-criminal administrative arrests were made in San Francisco from October 2016 to September 2017. Furthermore, there were 6,292 ICE removals. These statistics have heightened the hesitation and apprehension of immigrant patients in health clinics around the country.

My research seeks to discover what impact immigration reform, and the Trump era, have had on the HIV care continuum in San Francisco and the surrounding areas. The care continuum is a cascade of treatment stages starting with time of diagnosis to linkage/retention in care and ending with achievement of viral suppression. HIV is a chronic, lifelong disease which does not have a cure and must be treated using antiretroviral treatment (ART). This medication, when prescribed and utilized effectively, stops the replication of the virus in the body to a point of undetectable levels. When an individual achieves viral suppression, he/she may not transmit the virus to another individual.

As with most chronic care treatments, ART is generally taken daily and can be quite costly. In the United States, undocumented persons are ineligible for health coverage through Medicaid and Medicare. However, in 2014, the state of California expanded its Medicaid program, Medi-Cal, to cover undocumented persons. Between Medi-Cal and the federally-funded Ryan White Care Act (which covers HIV care for persons living at or below the federal poverty level), funding is available to treat undocumented persons in San Francisco. This issue is not lack of funding for care. The issue is restricted access to treatment and care.

While medical centers and clinics are declared to be “safe zones”—which immigration officers are forbidden from raiding without a search warrant—undocumented immigrants continue to fear racial/ethnic profiling and deportation. Given appointment cancellation rates and reports of increases in ICE raids, AIDS service organizations (ASOs) and community-based organizations (CBOs) in San Francisco question what impact this immigration reform will have on people living with HIV and on the San Francisco HIV care continuum. In addition, my research aims to uncover which stage of the care continuum is most affected by immigration reform in order to strategically intervene and effectively address and treat this population in San Francisco.

This will be qualitative capstone research project and I will conduct personal, semi-structured interviews with immigrant community members who are affected by HIV, as well as key informants who treat these individuals. Given the highly confidential nature of immigrant status and the stigma surrounding HIV, these interviews will be conducted in clinic locations and pseudonyms and unique patient identifiers will be used in analyzing data. Findings from this research project will be shared with ASOs, CBOs, and other key stakeholders in San Francisco.