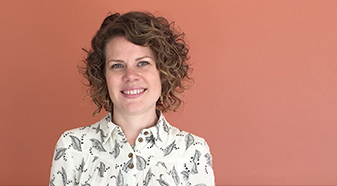 “Do you know any Shona yet? No? I’ll teach you Shona,” the clerk at the University of Zimbabwe-University of California, San Francisco (UZ-UCSF) Routledge Office tells me. Though English is widely spoken, and all signs are in English, Shona is the most common native language in Zimbabwe.

I write down the phonetic spellings as quickly as I can, trying to say the words correctly out loud, as he coaches me. “Okay, now you can say you know some Shona,” he tells me, smiling. I say “mazvita” in response, knowing I’m butchering it, “mazvita very much.”

When I see our clinic driver the next morning, I say “mangwanani Godfrey!” and Godfrey replies to me in Shona, then says, “So you speak Shona now?” “Not nearly enough,” I say. Godfrey smiles and says, “It’s okay.”

As we drive to the research clinic each day, we go from the “leafy neighborhood” where I am staying, through the downtown area, onto Rotten Row—a street that looks just like it sounds. Smoke billows from trucks and roadside fires, there is a massive power plant in view, the potholed roads get even more potholed. There is garbage everywhere, the sidewalks are obliterated, and broken down combis—the privately owned and operated vans that now serve as “public transportation”—are everywhere. An apartment building has a beautiful mural of children on one brick wall, broken windows on another. In some areas, cardboard makes up for where the glass is lacking; by the clothes hanging in the windows, it’s clear a lot of families live there.

Still, on Rotten Row, we skirt the edges of the Mbare suburb, getting just a peek at the huge market here. When I ask about the market, Godfrey says firmly, “Do not go there, it is not safe. There are so many thieves… If you need anything, you go somewhere else.” While we drive, I ask Godfrey about what it was like here 20 or 30 years ago. He tells me about how there were trains, a really good public bus system, good sidewalks, good roads, less garbage. Everything was better. There was poverty, but there wasn’t the extreme poverty you see every day, everywhere you look.

Another driver tells me, “The Zim dollar—it was even stronger than then UK Pound! One Zim dollar was two UK Pounds!” He says it proudly, but adds, “Then it got bad.”

In 2008, after years of rampant inflation, allegations of election-rigging and political, industrial, and financial distress, the economy finally and completely collapsed. The $10 trillion bank notes from the era prove it. They switched to the US dollar to stabilize the economy and stop the freefall. It helped, but recovery has been slow; at times, it seems nonexistent. Unemployment is still 70-90%. Many people work in the informal market, selling what they can, or working as laborers. “Labor is very cheap,” many people have told me, all saying it somewhat sheepishly. These are people who are formally employed, speaking of their maids and childcare providers.

One of the ripple effects of the economic crash is the ongoing cash crisis—there’s not enough paper money to go around. People literally sleep outside of banks at night so they can be the first in line to take out what little cash may be available that day. Every bank has a line in the morning, and the lines wind around the blocks. ATMs only allow you to take out $20 in cash per day. Many people don’t have debit or credit cards, so they literally need cash to buy food and essential goods for their families. Often times, they cannot get their own money out of the bank. Speaking of food, it’s expensive here, because much of it is imported from other countries. That’s another thing people here tell me about. Zimbabwe used to grow so much food, they would feed other countries. Now, even a loaf of mass-produced white bread is expensive.

Later, I ask a friend here about this decline when we are talking politics. We are like soldiers trading war stories. You tell me about your bad president, and I’ll tell you about mine. (Everyone here is interested in the global spectacle that is Trump.) He indulges my questions and tells me how public goods like roads and municipal water used to be valued, but they slowly started to lose funding. The healthcare system slowly got worse. He talked about a president who was freely elected, but in the face of challengers, started trying to buy, and then force, favor.

He also talks about how, even though there is corruption and the elections are rigged, there are people who still freely vote for the status quo. He says he doesn’t think it will change because people are thinking only about themselves and what they think they need now, and not about the future. It begins to sound familiar. Our countries could not be more different, and yet we are starting to speak the same language.

He warns me: “I am worried that what is happening in the US now is what was happening here 20, 30 years ago. I’m afraid for you.” I’m afraid for us, too. But I feel guilty complaining about Trump and the US when I see how much we have. Here, there are power outages daily. The clinic ran on generator power three days last week, and the administrative offices had to do the same. The first time the power went out at my house here, I thought, “Wow, I really am in a developing country,” almost like a research observation. The second time it went out at my house, I was annoyed: my laptop was almost dead, and I felt bad asking to turn on the generator just to have Wi-Fi. The third, fourth, fifth times, I realized that for me, it’s like “glamping” (glamorous camping). When you have enough food, clean water (or at least water you can boil), and resources—and you know it’s temporary for you—living without power is easy enough.

For the people here, it’s daily life. “Welcome to Zimbabwe!” the clinic staff tell me when the power goes out and the generator kicks in. We all laugh as they say it, and someone gives me a high-five.

And that’s the most important thing I’ve learned about Zimbabwe: the people here are so resilient and so warm and so welcoming. It’s customary not just to say “hi” in the morning, but to ask people how they are doing. And when you ask, you mean it, and you listen to the answer.